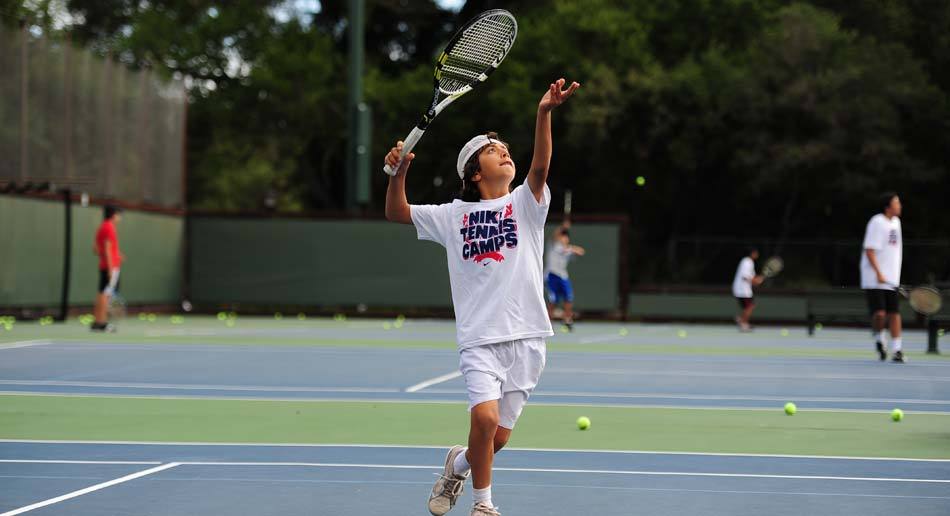 The overhead in tennis is one of the least practiced shots. The reason, in my opinion, is because the expectations for this shot are very high…it’s potentially a lethal, crowd pleasing, confidence building point ender, and when it’s performed poorly it can ruin your day, let alone your match outcome. It’s also not the easiest shot to perform…kind of like trying to hit a serve with a twenty foot high toss while moving in different directions. Too many players are happy to make a couple of decent overheads in practice or warmup and then stop before the potential errors start to creep in. Those are the ones you want to get up to net and lob like crazy! So here are some thoughts about a practice progression to try and simplify and strengthen this very important shot.

Once the lob goes up you must turn sideways. This allows for better movement back in particular and encourages what amounts to the equivalent positioning of the arms and racquet at the end of the serve windup (trophy position). Movement aside, when you face the net for either a serve or an overhead, your left leg is in the way of a follow through so you wind you with a compromised swing.

Ideally, as you move into position, you want to place yourself a step behind and slightly to the left of contact (right hander). I always use the outfielder in baseball analogy here. At the crack of the bat he’ll turn and move back into a position that allows him to transfer his weight forward and throw normally over out in front of the right shoulder simultaneously. When you practice positioning for the overhead it’s a great idea to take a number of lobs doing nothing but going back and catching the ball with an extended left arm in front of the right shoulder.

Next up is the timing of the swing. You have to allow enough time for the racquet to move in and out of the dropped position in a split second with a full reach up to contact. Ideally it’s identical in that respect to the serve and it’s wise to rehearse that motion without the ball as a reminder of what you want to do when you actually go to hit the ball. During racquet preparation the standard move is to have the tip of the racquet straight up, but for some players it’s better to have it more horizontal before the drop because it saves time to the drop.

The best approach is to reach up and hit the back of the ball and beyond…not the bottom or the top. Critical to this is the need to keep your head up until AFTER the ball is struck. The importance of keeping your head up can’t be overstated and one of the biggest deterrents to that is the overwhelming desire to blast the ball as hard as you can. Too often with that approach the head, shoulders and torso will all drop prematurely and the ball will land in the net or well beyond the baseline. You can certainly rip an overhead as long as you base doing it on good positioning, good timing and a solid model.